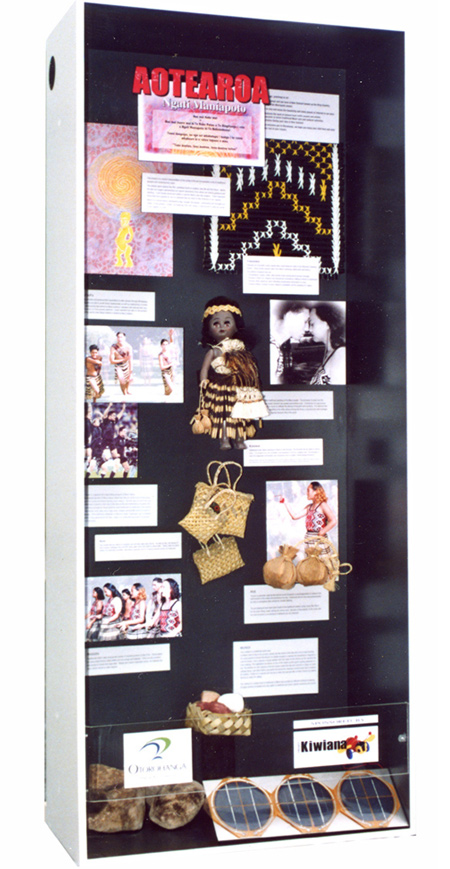 Welcome to Otorohanga and our area of New Zealand known as the King Country, traditional home of the Maniapoto people. We invite you to visit and enjoy the hospitality and many places of interest in our area.

This display features the work of several local crafts people and artists. It highlights samples of some traditional Maori arts and cultural activities you may experience during your stay in New Zealand.

Once again we welcome you to Otorohanga, we hope you enjoy your visit here and wish you well for the rest of your travels.

All family groups proclaim and preserve their association to other groups through Whakapapa or genealogy. Experts are able to quote family relationships, as well as relationships to tribes and sub-tribes. At functions that adhere to Maori protocol, speakers will indicate their own and other relationships to those people gathered. Expert speakers are able to cite ancestry far back beyond the period when Maori settled in Aotearoa-New Zealand.

The hongi is the traditional greeting of the Maori people. The pressing of noses and the mingling of the breath between two people demonstrate unity. Sometimes it is appropriate for the foreheads to touch to indicate the sharing of thoughts and emotions. It is believed that the first press is a greeting to the other person sharing the hongi, a second press acknowledges ancestors and a third press honours life in this world.

Traditionally Maori used song (waiata) as the means of recording events in their lives. Some waiata set down tribal history while others are love songs and lullabies. There are also laments and chants for those who have died. Waiata also record important names – for instance the stars, family names or place names.

The powhiri is a formal welcome on the marae. The tangata whenua (host people) and manuhiri (visitors) both have very strict roles to play in the powhiri. Usually the visitors wait beyond the marae entrance until they hear the karanga (a call to enter). The visitors, lead by the women, make their way across the marae towards the meeting house, while the women call back and forth. The visitors then move to one side and are seated with the men in the front. Those men who are speaking sit in the first row. After the formal speech finishes the visitors can move forward to greet the hosts with a handshake and hongi. Occasionally, for a very important visitor, there may be a wero (challenge) before the powhiri starts.

The poi is generally used by the women as an accessory or accompaniment to enhance the performance of the waiata and sometimes the haka. Traditionally the poi was used predominantly by men to strengthen their wrists for combat fighting. The poi displayed here have been made in the traditional manner using muka (flax fibre) for the inner filling, outer casing and woven cord. Because of the scarcity of the muka and the time involved in processing it, traditional poi are treasured.

Hangi is food cooked in a traditional earth oven. A shallow hole is dug in the ground, stones line the inside of the hole and a fire is kept burning for a long period to ensure the stones are heated enough to maintain the temperature required to cook the foods. Food is placed in hangi baskets with the meats on the bottom as this requires the most cooking. The vegetables are placed on top of the meats and the quick cooking seafood is on top. The baskets are then placed on the hot stones inside the hole and covered in a layer of moist cabbage leaves, wet cotton fabric, and sacks that ensure the necessary moisture and heat is retained for cooking. Finally soil is placed over the top to retain the heat and, after at least 3 hours of cooking, the food is ready for eating. This method of cooking food is traditional to Maori and provides an efficient method of catering for large numbers of people, who may gather to celebrate and honour special occasions and events.

Flax woven kits are items in constant use and they take many forms. As well as flax, the leaves of the ti kouka (cabbage tree) and the nikau palm were also used to weave kete. Today kete are used widely for everyday activities, decorative purposes and for holding special articles or treasures.

Traditional muka (fibre) weaving is shown in this Korowai. The Korowai can be made in various sizes. It is draped over the shoulders and fastened in front by a plaited cord. The Korowai is worn for important ceremonies and occasions and is a highly valued taonga (treasure). We pay tribute to the late Dame Rangimarie Hetet and her daughter, Diggerress Te Kanawa, well known master weavers from Maniapoto, who continued this ancient art and have shared their knowledge and skills with others.

Tukutuku are intricately woven panels often found lining the walls of the Wharenui (meeting house). These panels express ideas from Maori mythology, philosophy and history. The patterns displayed here are: Tumatakahuki (pattern either side) double/triple binding which ensures strength. Poutama (steps) has religious and educational connotations relating to levels of attainment. Roimata Toroa (albatross tears) denoting misadventure particularly to crops. Purapura Whetu (myriad of stars) relates to population and the peopling of a region.

More information about Maoritanga:
Maoritanga is Maori culture; a way of life and view of the world. The ancestors and all living things are descended from the gods, our mountains, rivers and lakes; this explains why the land is so important to Maori.

The Treaty of Waitangi was signed in 1840. The first article gave the Queen of England the right to make laws and the second article promised Maori full rights to their lands, forests and treasured possessions (and fisheries in the English version). The third article gave Maori all the rights and privileges of British subjects. Maori is an official language of NZ, although it is rare to hear it spoken outside the Maori community, except on ceremonial occasions. To preserve the language there is a network of Kohanga Reo, or ‘language nests’, preschools where children learn the Maori language and culture. There are also Kura Kaupapa, or Maori Immersion Schools, as well as bilingual units attached to many mainstream schools.

Maori culture was transmitted orally, through the telling of stories, song (waiata) and the reciting of whakapapa (genealogies). It was also represented in stylised carvings and woven panels that adorned wharenui (meeting houses).