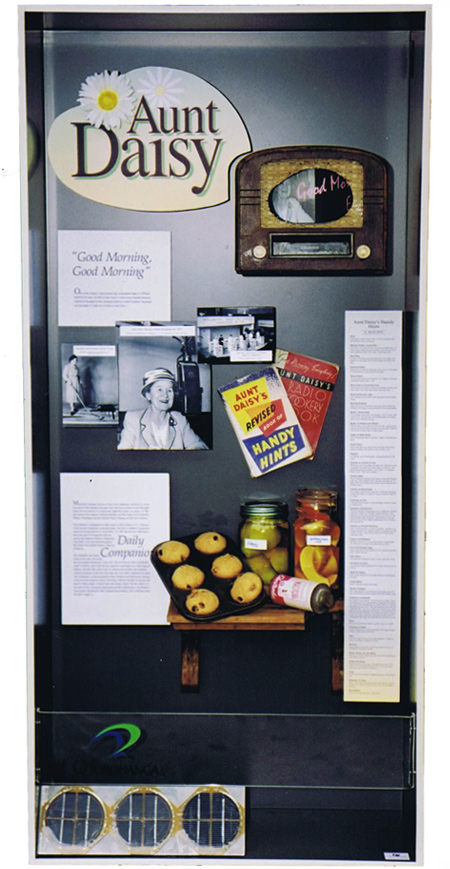 One of this country’s most famous radio programmes began in 1937 and lasted for 25 years. For half an hour, from 9 o’clock every weekday morning, hundreds of thousands of New Zealanders tuned in on their Columbus, Skyscraper and Pacemaker radio sets to listen to Aunt Daisy.

Maud Ruby Basham, known as Daisy from childhood, was born in London and came to New Zealand at the age of ten. She went to school at New Plymouth, where she also trained as a teacher and topped the country in science. In 1904 she married civil engineer, Frederick Basham, and the couple lived in Hawera, Eltham, Waipukarau and the Hauraki Plains, bringing up their three children.

Daisy Basham’s introduction to radio came in 1926 at station 1YA, Auckland, where she gave broadcasts on musical topics. This led to a children’s programme where she became known as “Aunt Daisy”. In 1937 she moved to Wellington and at the age of 54 began the morning session that made her famous. Originating from 2ZB, it was networked throughout the country and quickly became a national institution.

The inimitable Aunt Daisy broke all the rules, becoming the most popular broadcaster of her time. She was blessed with a remarkable clarity of diction, and could deliver a rapid-fire monologue on a wide range of subjects.

She also had a great sense of curiosity and wonder and a genuine concern for people. In pre-television days she was a daily companion for many New Zealanders. A large proportion of her listeners were housewives taking a break from their domestic duties. Aunt Daisy offered a thought for the day and had an endless supply of handy hints and recipes, which were the subjects of her many books. Among her enthusiastic product endorsements was Bushell’s Tea, recently introduced to New Zealand from Australia. This would have been the ideal “cuppa” too.

Three generations of New Zealanders responded to that radio show greeting from Aunt Daisy every morning at nine o’clock. Thousands of children learned to repeat it after her. Her listeners were cheered by her unquenchable optimism, especially during the wartime years – she could always find a patch of blue sky on the stormiest morning. Aunt Daisy’s distinctive voice could be heard on radio promoting products of the day, sharing favorite recipes and dispensing handy hints to make life a little easier.

Ants: Stand legs of table in tins of water or tie fur around the legs – prevents them from crawling up.
Bee stings: To relieve a bee sting, take the outside peel of an orange and squeeze it on the sting. The oil in the orange skin relieves the pain.
Beetroot stains: When beetroot stains the tablecloth, soak a piece of white bread in water and lay on. Also good for fruit stains.
Blood stains: Never put anything hot on bloodstains. Try soaking in cold water containing washing soda or salt.
Blowing bubbles: Add a few drops of glycerine to the soapy water; it helps the children to blow larger, stronger and bright-coloured soap bubbles.
Boot polish on Evening Frocks: First sponge with alcohol or carbon tetrachloride and then with warm soapy water, afterwards rinsing with clean water.
Brass Knobs & Taps: After polishing, rub up with a floury rag; they will stay bright longer.
Butter (home-made): In hot weather, churn early in the morning – 5 or 6 o’clock – while cream is cool. Also put cold water through churn, not boiling water, as one would do in winter.
Butter (to preserve for winter): Make up butter, as for table use, into 1 pound pats. Wrap up each pound in greaseproof paper and place it in brine made of salt and water strong enough to float an egg or potato.
Cakes (to make moist): Add a well-chopped apple to fruit cake. Makes it richer and more moist.
Cane Chairs: When cane chairs sag, sponge with hot, strongly salted water. Stand in draught to dry and do not use for a day or two.
Carpets: An underlay, even of thick papers, will prolong the life of the carpet.
Carpets (to convert to Lino): When worn out, reverse them and shake well. Paint all over the wrong side with a thin, boiled starch paste or with size. Then paint with a good floor enamel – any colours – a contrasting border is nice. These can be washed.
Cereal Coffee: Warm 2 tablespoons golden syrup in meat tin, then add 2 breakfast cups bran. Bake a golden brown and store in airtight jar. To make coffee, pour boiling water on bran, add hot milk and leave awhile to steep.
Cheese (to keep fresh): Put a lump of sugar in the cheese dish. To prevent from going mouldy after being cut, wrap it in a piece of muslin wrung out in vinegar.
Chimney on fire: Close doors and windows to stop all draught and throw plenty of salt on the fire.
Colours (to prevent running): Grate 2 medium potatoes as finely as possible. Add ½ cup vinegar and ½ cup salt. Stand for 10 minutes and add 1 gallon of water. Soak articles in this for 20 minutes before washing as usual.
Crayon on wallpaper: Rub hard with slices or crusts of fresh bread or bread dough. Use clean pieces of bread as the others become soiled.
Don’t pat strange dogs: A pat on the head of a dog upsets his nerves and has an irritating effect. Stroke him only.
Flies in food safe: Keep a small spider in one corner. Put a few grains of sugar in daily to keep him happy.
Fish Odour: Add mustard to washing up water to remove the odour of fish.
Furniture (to clean): Clean furniture before polishing with a cloth wrung out in weak cold tea.
Grass Stains: Soak in methylated spirits, then wash.
Hands, chapped: Mix equal quantities of mutton fat and icing sugar and rub in night and morning and after washing.
Husband (to preserve): Be careful in your selection. Do not choose too young. When once selected, give your entire thoughts to preparation for domestic use. Some insist in keeping them in a pickle, others are constantly getting them into hot water. This may make them sour, hard and sometimes bitter. Even poor varieties may be made sweet, tender and good by garnishing them with patience, well sweetened with love and seasoned with kisses. Wrap them in a mantle of charity. Keep warm with a steady fire of domestic devotion and serve with peaches and cream. Thus prepared, they will keep for years.
Mice: Bait the trap with bread soaked in vanilla. They love vanilla.
Potatoes (to bake): When roasting potatoes with meat sprinkle a little sugar on bottom of dish. Potatoes brown deliciously.
Rice: Add a few drops of lemon juice when boiling rice. Improves flavour and helps to separate the grains.
Scones: When making scones, they will be much lighter and finer if a tablespoon of cornflour is added.
Shoes (to turn brown shoes black): Rub shoe over with a freshly cut potato, leave to dry, then blacken with ordinary nugget.
Snails & Slugs: Put down oatmeal at the edge of the garden and cover it with boards. Next morning the board will be covered with slugs, which may then be taken off and burnt.
Soup: Always add a little Marmite to vegetable soup and a little chopped mint.
Windows (to clean): Make a pad of newspaper and sprinkle with ammonia. Rub the insides of the window with this and you may not be troubled with flies.