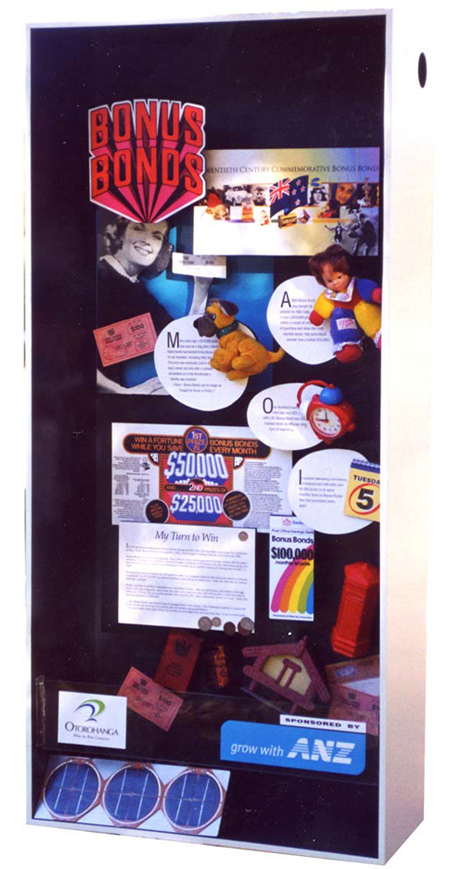 Bonus Bonds proved an instant success. They offered a Government-guaranteed savings scheme with the added attraction of monthly tax-paid prizes. Investors bought a minimum of 20 tickets at $1 each, their money going into low-risk investments. Earnings were distributed as monthly prizes and the chances of winning were around 1 in 9600.

Winning Bonus Bonds numbers are still picked monthly by a computer called ELSIE (Electronic Selection Indicator Equipment). In 1971 ELSIE was built of transistors and took up an entire room. Today she looks like an ordinary desk-top computer.

Nearly one third of all New Zealanders now own Bonus Bonds – either as individuals, joint holders or through trusts, clubs and companies – and to date they have won some two and a half million prizes worth more than $1 billion. In 1970 the first prize in the monthly draw was $10,000 – then a substantial amount of money. Today this has been increased to $300,000.

Today Bonus Bonds represent the largest managed fund in the country. New Zealanders continue to invest with Bonus Bonds, also proving to be popular gifts for children and grandchildren. And each month some lucky Bonus Bond holder receives that letter advising them they’ve just won $300,000!

A $50 Bonus Bond was bought by parents for their baby. It won a $10,000 prize within a couple of months of purchase and when the child reached seven, that same Bond number won a further $15,000!

Many years ago, a $10,000 prize was won by a dog after a North Island family had decided to buy Bonus Bonds for all members, including their dog. The prize was eventually paid to the dog’s owner but only after a suitable declaration as to the Bondholder’s identity was received. ( Sorry – Bonus Bonds can no longer be bought for Rover or Fluffy! )

One Auckland woman, who had won $25,000 with a $1 Bonus Bond was finally tracked down by officials after five years of searching. In another interesting coincidence, a husband and wife both won $5,000 prizes in the same monthly draw on Bonus Bonds they had purchased years apart.