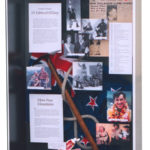 On Top of the World

New Zealand’s most distinguished citizen and the first person to reach the top of the world’s highest mountain, was born in Auckland on 20 July, 1919. Edmund Percival Hillary spent his early years at Tuakau, south of Auckland, where his father – a Gallipoli veteran – ran the local newspaper. The young Hillary went to Auckland Grammar School and it was a school skiing trip to Mount Ruapehu that first stimulated his interest in mountaineering.

In 1936 Hillary left school to become a beekeeper. Three years later, when he climbed his first mountain in the South Island, he was determined to become a mountaineer. He went climbing in the European Alps and the Himalayas and in 1953 was offered the chance to join an attempt on Mt. Everest by a British team led by John Hunt.

Hillary’s strength and experience made him ideally suited for the final assault on the summit, which he reached with Sherpa Tenzing Norgay on 29 May, 1953. This successful ascent of the world’s highest mountain coincided with the coronation of Queen Elizabeth II at Westminster Abbey and shortly after Hillary was knighted for his achievement.

From 1956 to 1958 Sir Edmund Hillary was involved in the Trans-Antarctic Expedition and was part of a group who were the first to drive vehicles to the South Pole. For the 2011 kilometre journey from Scott Base across the Ross Ice Shelf they travelled in modified versions of the Ferguson tractor, a familiar sight on the farms of New Zealand.

Hillary returned to the Himalayas in 1960. Among other things, this expedition included a search for the yeti, but the Abominable Snowman remained elusive. For health reasons Hillary now had to give up high-altitude climbing and so began to concentrate on the building of schools, hospitals and other facilities for the Sherpa people of Nepal.

In 1984 Hillary was appointed New Zealand High Commissioner for India, based in New Delhi. In 1989 he was among the first to receive the newly created Order of New Zealand, this country’s most prestigious decoration and six years later Queen Elizabeth II awarded him the Order of the Garter, the highest order of knighthood. Our highest achiever, in all senses, Sir Edmund Hillary continued to represent the qualities which New Zealanders admire most – stamina, determination and quiet achievement.