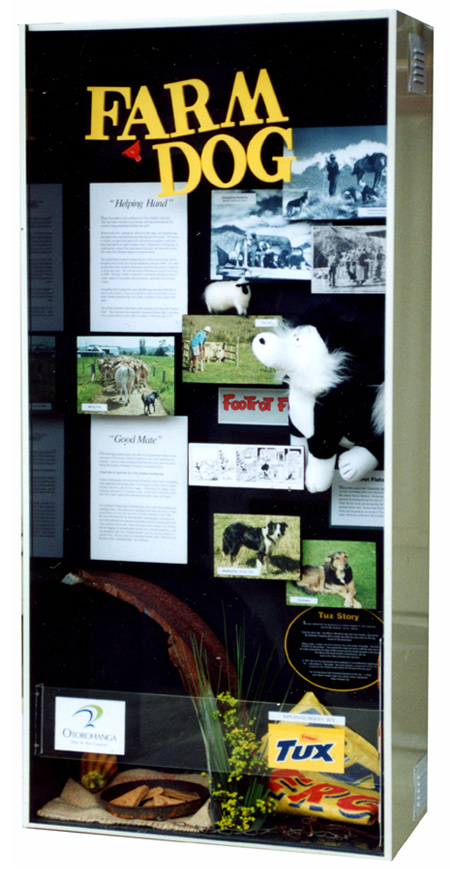 Dogs have made a vital contribution to New Zealand’s economy. They have been essential to our farmers, droving and mustering this country’s large population of sheep and cattle.
Where would New Zealand be without its farm dogs? – the Heading dogs that gather stock, and the Huntaways that bark and drive stock? The answer is simple: our agriculture and social and technical progress would have been held back by at least a hundred years. Without the working dog, we could not have farmed the large areas of flat plain and steep hill country that make New Zealand unique as a pastoral nation.

The typical New Zealand working dog has evolved from border collies brought to this country by Scottish shepherds in the late 1800s. The skills displayed by these energetic farmhands soon led to the national institution of sheep-dog trials. The first was held at Hakataramea, South Canterbury in 1889. The dogs’ ability to respond to commands and bail up sheep is a great source of fascination and amusement, particularly for overseas visitors.

Altogether New Zealand has some 600,000 dogs and about 200,000 of them work on farms. Dogs are essential on high country farms, but on many smaller properties they have been overtaken by four-wheel farm bikes.

One of New Zealand’s most famous farm animals is “Dog” from Footrot Flats. This character was inspired by cartoonist Murray Ball’s own dog, Finn, a short-haired border collie who died in 1998 at the age of 16.

Our farm dogs enabled sheep and cattle to be farmed and handled on the vast areas of hill country cleared of bush by a very small population of pioneers. Later on farm earnings flowed into the towns and built cities, laying the business foundation for today’s prosperous society.

A hard day is a good day for a New Zealand working dog. A good working dog loves its job and will do the work of up to 10 people when gathering and moving stock. It never goes on strike, doesn’t expect holidays and never asks for more wages. A farm dog is an athlete, often doing the equivalent of a marathon a day. At the end of a hard day all it asks for is a pat, a good well-balanced meal and a warm dry kennel.

New Zealand’s farmers have benefited from their many hard-working and intelligent dogs. One particularly intelligent individual was Jack, a rough haired black and tan collie that lived in South Auckland in the 1930s. He was well known for his farming skills, opening gates, bringing tools out to the paddocks on command and feeding fowls by shaking grain from a box carried in his mouth. One of his most useful interests was seeking out and digging up unwanted dock weeds from cultivated paddocks. Jack was featured in the New Zealand Herald and was also the subject of a (small) book. When he died an Onehunga tannery kindly offered to cure the skin of this “celebrated dog” free of charge.