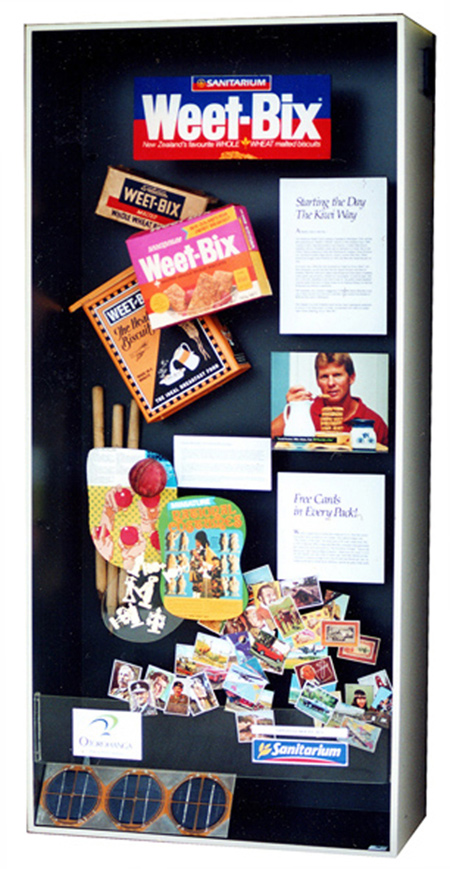 Starting the day the Kiwi way…

The Sanitarium Heath Food Company originated in Michigan, USA and has been practising its “Health is Wealth” maxim in New Zealand since 1898. Among its early imported products was Granose, a wheat flake biscuit marketed both as a breakfast cereal and an alternative to bread. But in the 1920s it faced competition when the Christchurch company, Grain Products Ltd, introduced another flake biscuit, which it named Weet-Bix. When Sanitarium bought Grain Products in 1930, the Weet-Bix brand became its own.

In its early days Weet-Bix was promoted as “Ideal for Every Meal”, but New Zealanders quickly decided that the malted biscuits were best for breakfast. Weet-Bix went on to capture some 40 percent of the nation’s breakfast cereal market and proved to be as versatile as it was popular. It could be eaten with hot or cold milk, depending on the time of year. As “the perfect winter breakfast” it had the added distinction of being chosen by Sir Edmund Hillary for both his Himalayan and Antarctic expeditions.

New Zealanders now consume a staggering 312,000,000 million Weet-Bix every year. If these biscuits were laid end to end they would stretch from Kaitaia to Bluff and then back to Wellington.

New Zealand’s favourite breakfast cereal can also claim a geological connection. In honour of the flaked grains of wheat, mountaineers now refer to a certain type of loose shattered rock as “Weet-Bix.”

Free cards in every pack!

Weet-Bix’s appeal has no doubt been enhanced by its “free full-colour” collectable cards included in every packet. This tradition began with “The Treasury of the Years”, ten series each of 50 cards issued from 1941 to 1953. In the mid-1950s young male Weet-Bix consumers were particularly well catered for with such series as “The Evolution of Flight”, “Sports and Racing Cars” and “Famous Ships in History”.

There were two cards in every 24-ounce packet and one in the 12-ounce size. Since then Sanitarium has continued to issue an average of two sets of cards and albums per year on subjects as diverse as conservation, Indonesia and the fun parks of the world.